Posted on January 25, 2008 by
This entry was posted in Jessica Lacher-Feldman, Manuscript Collections and tagged Helen Keller. Bookmark the permalink. 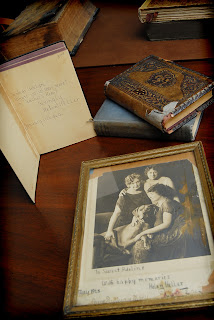 A small exhibit is now on display in the lobby of the W.S. Hoole Special Collections Library. The items were part of a gift to The University of Alabama Libraries by Betsy Plank, UA alumna and pioneer in the field of Public Relations. These items are all inscribed by Alabama native, Helen Keller (1880 -1968), a longtime friend of Ms. Plank’s family.

The photograph and the book Midstream are inscribed to her aunt Adeline by Ms. Keller, her teacher Anne Sullivan, and Ms. Keller’s companion, Polly Thompson. The book, Helen Keller’s Journal is inscribed to Bettye Hood Plank, Ms. Plank’s mother.

Helen Adams Keller was an author, activist and lecturer and is known internationally for her courage and triumph over adversity. Her story was made famous through dramatic productions of the Miracle Worker, both on the stage and screen.

Fellow Alabamian Betsy Plank graduated from The University of Alabama in 1944 and went on to a stellar career in public relations, eventually becoming known as “public relations’ first lady” and garnering numerous awards. In 2004, the UA Board of Trustees adopted a resolution establishing the Betsy Plank Center for Public Relations Studies to promote “effective and ethical representation of institutions, organizations, ideas and individuals.” As donor for the Center and to University Libraries, Ms. Plank has demonstrated her continued dedication to the University, its students and society.

Photograph of these materials by Zach Riggins, UA Photography.

This entry was posted in Jessica Lacher-Feldman, Manuscript Collections and tagged Helen Keller. Bookmark the permalink.