Posted on February 4, 2008 by
This entry was posted in Alabama Collection, Jessica Lacher-Feldman, Manuscript Collections, Mobile. Bookmark the permalink. 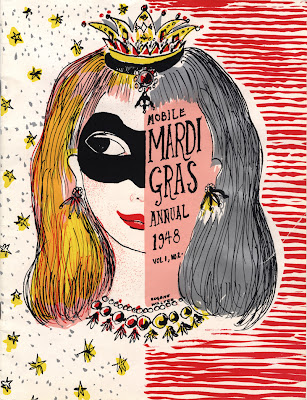 Alabamians are quick to point out that New Orleans was not the first place, nor is it the only place that Mardi Gras is celebrated. While celebrations occur throughout the state of Alabama, it is Mobile’s Mardi Gras tradition, which dates back to 1703 (!!!) that really gives Alabamians bragging rights.

Featured here are images from sixty years ago – the 1948 Mobile Mardi Gras annual program. This program is especially cool because it features drawings by Mobile native and favorite son, Eugene Walter. Walter was a true Renaissance man — actor, poet, artist, editor, costume designer, playwright, puppeteer, translator, raconteur, author, chef, bon vivant, and so much more. Yes, really! He has also been called “the most famous man you never heard of”. He knew everyone, and counted people such as Truman Capote (who he knew as “Bulldog” Persons as a child), William Faulkner, Isak Dinesen, Judy Garland, and Frederico Fellini among his friends. His published works are featured in the Hoole Library’s Alabama Collection.

And though he lived for many years in New York, Paris and Rome, he always considered Mobile (which he fondly referred to as “North Haiti”) his home. So much so that he carried a shoe box of Alabama red clay dirt with him in his twenty-plus years in New York and Europe.

This program and its whimsical drawings offer a tiny glimpse into Walter’s incredible gift for caricature and humor. We should all raise a glass to celebrate North America’s oldest Mardi Gras and celebrate an Alabama favorite son, hero, and free spirit, who according to Dinesen, “ate the ripened heart of life”, Eugene Walter.