The Swinging Sounds of Babe Ruth!

Posted on July 11, 2008 by
This entry was posted in Jessica Lacher-Feldman, Manuscript Collections, Sports and tagged Mel Allen. Bookmark the permalink. 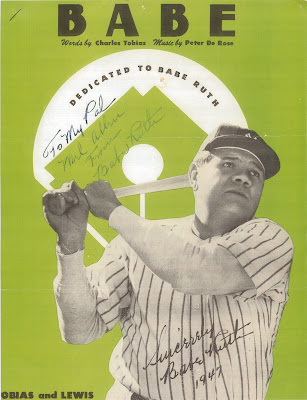 Ninety-four yeas ago, on July 11, 1914, the soon-to-be legend Babe Ruth made his debut in Major League Baseball — he played for the Boston Red Sox, but in the 1919 season he was sold to the New York Yankees.  He retired in 1935 – his one year as a Boston Brave, and is universally recognized as one of the greatest athletes of all time and the greatest baseball player of all time.  For example, In 1927, Ruth was the first player to hit sixty home runs in one season, a record which stood for thirty-four years, when it was broken by Roger Maris in 1961. The Babe’s lifetime total of 714 home runs at his retirement in 1935 was a record for thirty-nine years, until broken by Mobile, Alabama native Hank Aaron in 1974.

This piece of sheet music, Babe is inscribed by Ruth to Mel Allen, UA graduate, Alabama native, and “Voice of the New York Yankees”.  Though Allen joined the Yankees a few years after Babe Ruth’s retirement in 1935, they did work together and were friends until Babe’s death in 1948.

Here’s Mel Allen on  his time with Babe Ruth:

And here is a great 1937 Vitaphone reel — with Babe Ruth doing a little acting, and a little singing, too!

In addition to Babe Ruth’s incredible prowess as a baseball player and celebrity, he is credited for changing the sport — and bringing it from a slow moving to a more exciting and fast-paced game.

And with all the talk about Yankee Stadium – as this famous and important structure stands for its final year, its kind of cool to think about one of its monikers — The House that Ruth Built!

And don’t worry — there will be something cool here on our beloved Mel Allen soon!
This entry was posted in Jessica Lacher-Feldman, Manuscript Collections, Sports and tagged Mel Allen. Bookmark the permalink.