Posted on November 15, 2007 by
This entry was posted in Alabama Collection, Jessica Lacher-Feldman and tagged Harper Lee. Bookmark the permalink. 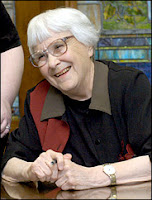 A very special congratulations to beloved native daughter, University of Alabama alum, and friend to the UA Libraries, Nelle Harper Lee. On November 5, 2007, Ms. Lee was awarded the Presidential Medal of Freedom, the nation’s highest civilian award. The image here is from a January 2006 NY Times article by Ginia Bellafante on the To Kill a Mockingbird High School Essay Contest sponsored by UA’s Honors College. The photograph was taken in the lobby of the Hoole Library (and features my arm along with Ms. Lee’s visage!). Note the Tiffany stained glass window in the background. (photo by Dana Mixer for the NY Times –http://www.nytimes.com/2006/01/30/books/30lee.html)

Ms. Lee attended The University of Alabama from 1945-1949. Her novel, To Kill a Mockingbird, received the Pulitzer Prize in 1960 and it continues to captivate the minds and hearts of people all over the world. Several editions of To Kill a Mockingbird are of course included in the Hoole Library’s Alabama Collection.

This entry was posted in Alabama Collection, Jessica Lacher-Feldman and tagged Harper Lee. Bookmark the permalink.