Of birthdays, Campus Humor Magazines, and the Pulitzer Prize!

Posted on April 29, 2008 by
This entry was posted in Corolla, Jessica Lacher-Feldman, Rammer Jammer and tagged Harper Lee. Bookmark the permalink. 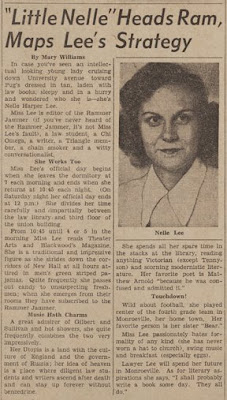 One of the most beloved Alabamians and University of Alabama alums has a birthday this week – Happy Birthday, Harper Lee! And it was 47 years ago this week that she received quite a birthday present — the Pulitzer Prize in Letters for her novel (and one of the most read and beloved books of the 20th century), To Kill a Mockingbird.

What many people don’t know about Ms. Lee is that she got her literary start right on The University of Alabama campus as a columnist and editor. In 1946, she served as the editor of The University of Alabama’s humor magazine, Rammer Jammer. The UA Libraries have started to digitize the Rammer Jammer , with some of the earliest issues available here with more to come!

The images featured here are from three of the major University of Alabama student publications — an article from the Crimson White (“Little Nelle” Heads Ram, Maps Lee’s Strategy”) which appeared in the October 8, 1946 edition; a page from the 1947 yearbook, the Corolla (which are also being digitized as part of the Corolla Digital Initiative — did you know that you can sponsor a Corolla and make it available online! ); and Rammer Jammer, the UA humor magazine which was published from the mid-1920s through the mid-1960s — it later became known as Mahout. 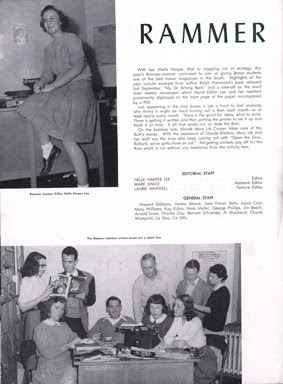 All of these publications are housed at the Hoole Special Collections Library (of course!) and are very, very cool — and now some of them are available online, which is also very cool indeed. But we all know who is the coolest — and we wish her a very Happy Birthday!