Posted on June 3, 2008 by
This entry was posted in Jessica Lacher-Feldman, Manuscript Collections and tagged Hudson Strode, Jefferson Davis. Bookmark the permalink.

Jefferson Davis, the first and only president of the Confederacy was born 200 years ago today in Kentucky — on June 3, 1808.

A definitive Jefferson Davis biography was written by Hudson Strode and published by Harcourt Brace in 1955.

Strode was a University of Alabama graduate and legendary professor at UA. He was a fascinating man who left an incredible legacy to The University of Alabama, including an endowed program, his beautiful home, and a residence for a graduate student in the department of English. Hudson Strode is pictured here, gun at his side, pipe in hand, a dashing and mysterious figure. 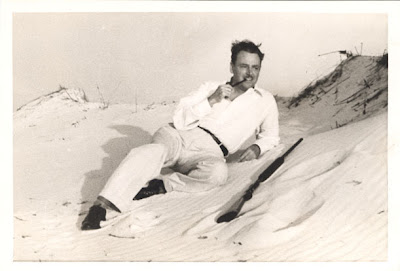 Hudson Strode’s papers are housed at the Hoole Library and consist of correspondence, typed manuscripts, proof sheets photographs, and other interesting materials. 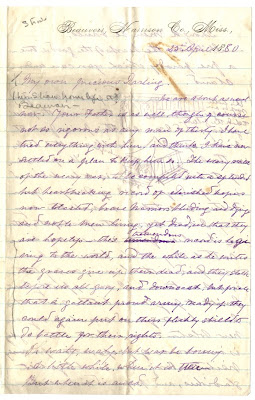 Letter from Varina Davis to Jefferson Davis, 25 April 1880.
The Jefferson Davis materials in the Hoole Library
come from Hudson Strode’s papers orginally.
Strode corresponded with some of the best known political and literary minds of the day including Aldous Huxley, H.L. Mencken, Sigrid Unsdset, Pearl S. Buck, Hugo Black, George Wallace, Clifton Fadiman and Alfred A. Knopf. The collection also contains research materials for his biography of Davis like the image of the letter featured here. You can view the finding aid for this collection at http://www.lib.ua.edu/libraries/hoole/findingaids/pdf/ms_1361.pdf
This entry was posted in Jessica Lacher-Feldman, Manuscript Collections and tagged Hudson Strode, Jefferson Davis. Bookmark the permalink.