Posted on June 6, 2008 by
This entry was posted in Jessica Lacher-Feldman, University Archives. Bookmark the permalink. 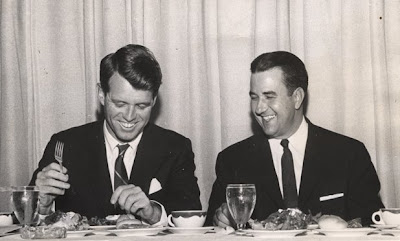 This photograph of Senator (and Presidential Candidate) Robert F. Kennedy and University of Alabama president, Frank Rose was taken when Kennedy visited UA in March of 1968 as part of the Emphasis program.

Robert F. Kennedy not only visited campus as part of Emphasis, but he is to be remembered as the Attorney General of the United States who oversaw the successful and peaceful integration of The University of Alabama in June of 1963. Working with his future successor, Nicholas Katzenbach, Kennedy brought about this important step forward and is forever part of UA’s place in American Civil Rights history. 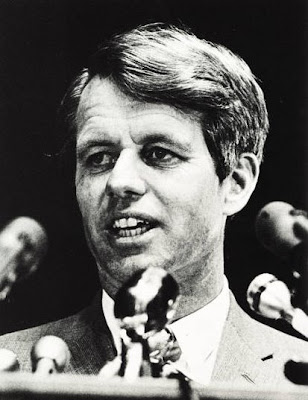 When Senator Kennedy visited campus in 1968, just three months before his assassination, he gave the keynote address for Emphasis ’68 — a talk entitled “America at the Crossroads”. To listen to the audio file of his speech, visit here. To view the program for Emphasis ’68, visit here. You can also read his speech and view it as it was given to us here. All of this material is part of the Emphasis collection, part of the UA Libraries’ Digital Collections. 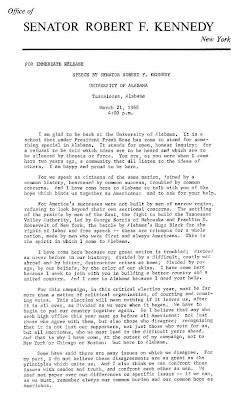 In his address to the students of The University of Alabama, he said the following — words which ring true today as they did some forty years ago.

“It is the fate of this generation to live with a struggle we did not start in a world we did not make. But the pressures of life are not always distributed by choice. And while no nation has ever faced such a challenge, no nation has ever been so ready to seize the burden and the glory of freedom.”

This entry was posted in Jessica Lacher-Feldman, University Archives. Bookmark the permalink.