Posted on August 15, 2008 by
This entry was posted in Jessica Lacher-Feldman, UA Athletics, University Archives. Bookmark the permalink. 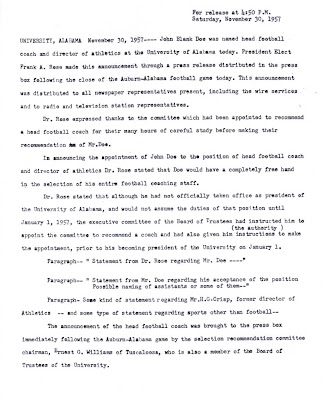 This seemingly mundane piece of paper is anything but dull. It is an image of the dummy press release drafted to announce the newly appointed head football coach and director of athletics at The University of Alabama. Scheduled to be named on Saturday, November 30, 1957 at 4:50 pm, there is no question that certain people knew who that name was, but the need to keep things under wraps until the right time is all part of the process — just as it is done today.

That John “Blank” Doe was none other than Coach Paul “Bear” Bryant, who took over as head football coach for the 1958 season. Bryant coached at The University of Alabama for twenty-five years, winning six national championships (1961, 1964, 1965, 1973, 1978 and 1979) and thirteen SEC championships. Coach Bryant’s win over Auburn (which was coached by one of his former assistant coaches, Pat Dye) in November 1981 was his 315th win as a head coach, made him the winningest college football coach of all time.

With the 2008 football season just 15 days away, it’s a great time to reflect on some of the history of one of the most celebrated college football programs in the country.  Roll Tide!!!