One of the many projects we are working on at the Hoole Special Collections Library centers around our foreign language rare books. Right now we’re spending some time with the Italian rare books in our collection. One thing we find is that no matter the origin or provenance of any particular item, it’s always cool to look at any book and see where it can take you. Sometimes it’s far beyond the actual content of the book where you can find the most interesting stories. 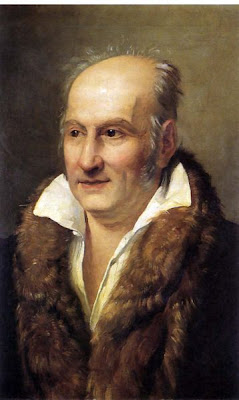 For example, we have in the Hoole Library’s Rare Books collection a book on criminal law entitled Genesi del Diritto Penale (or the Origins of Penal Law), written by Giovanni Domenico Romagnosi and published in Milan in 1823. There is a faint inscription on inside of the front cover – “University of Alabama. Presented by — Ex Libris J. Walker Fearn, N.O. 26 June 1885.” 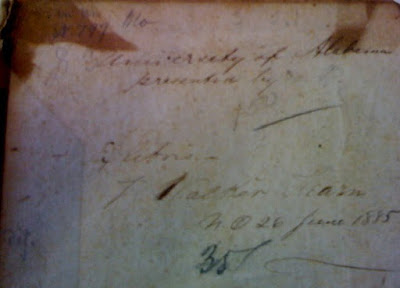 Inscription on the inside of the front cover

It is said that Romagnosi conceived the Genesi del Diritto Penale in Piacenza, completed the work by 1787 and first published it in Pavia in 1791. It was enlarged with the 5th and 6th parts in the 1823 edition published in Milan, and this is the edition that the Hoole Library holds (and one of only three in WorldCat!). The concepts, theories and reflections on the natural and metaphysical origins of the right to punish that the author exposed remain to this day important in legal scholarship. His theories and ideas were even more broadly explored in this 3rd edition. 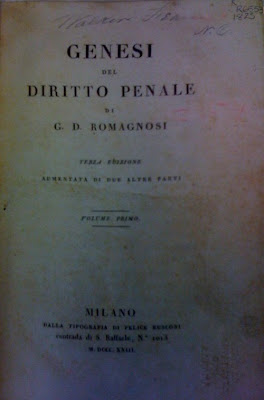 While the book itself is interesting and important, it was fascinating to discover through a little sleuthing how and from whom we acquired this book.

The inscription above shows us that it had belonged to and was given to The University of Alabama by John Williams Walker Fearn, a lawyer and diplomat. Fearn was born on January 13, 1832 in Huntsville, Alabama, and named for his grandfather, John W. Walker. Walker was was an important person in early Alabama history — he was President of the Convention which framed the constitution preceding Alabama’s statehood and was the very first Senator for the State of Alabama.

His grandson and namesake, the owner of this book, did not attend The University of Alabama, but graduated from Yale University in 1851. He studied law in France and in 1853 was admitted to the Mobile bar. Soon after, in 1854 he was entrusted with several diplomatic missions in Europe in behalf of the government of the Confederate states. During the Civil War he attained the rank of Lieutenant Colonel, serving on the staff of General Preston. After the war, he practiced law in New Orleans until 1885, when he was appointed Minister to Greece.

So what does this rare Italian law book have to do with Crimson and White? Those colors are everywhere — crimson representing school spirit, pride, and of course, brings to mind that ubiquitous name for The University of Alabama, The Crimson Tide!

It just happens to be that the very year that John Williams Walker Fearn was appointed to serve as Minister to Greece, his daughter, Mary Fearn served as a sponsor for a drill competition held in New Orleans. 1885 was also the very same year that he inscribed and gave this book to The University of Alabama.

UA was a very different place in 1885 — a military school, in fact. And The University of Alabama Company E cadets were in the competition. The story goes that Mary Fearn asked the UA cadets what their colors were so that she could plan her own outfit for the day. When they responded that they had no official colors but wore black caps, gray coats and white trousers for competition. She was purported to have responded that black is too funereal, and gray was too neutral. So she picked crimson, white and gray for her outfit.

It’s exciting to point out that The University of Alabama won this competition! And it’s very cool to ponder about this very book may have travelled back with the cadets from New Orleans to Tuscaloosa. Perhaps it was a token of his esteem to the winning team, or given in honor of his daughter, the team’s sponsor in New Orleans.

The rest, as they say, is history. Beginning in 1892, the football team always wore white uniforms with crimson stockings and large “U of A” in crimson on their sweaters. Other athletic teams at The University followed suit. Within a year, in spring 1893, the annual dance was decorated in crimson and white, and our student newspaper (the oldest student newspaper in the Southeast!) was named the Crimson-White. 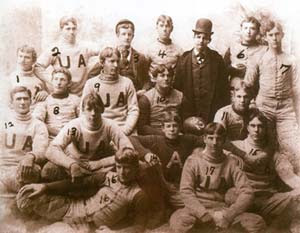 The 1892 University of Alabama Football Team

Mary Fearn joined her family in Europe where she met and later married an Imperial Russian Prince, one Sergei Mikhailovitch Volkonsky. (Серге́й Миха́йлович Волко́нский). He was an interesting man, extremely influential in the Russian theatre and one of the the first Russian proponents of eurhythmics, pupil and friend of Émile Jaques-Dalcroze, and creator of an original system of actor’s training that included both expressive gesture and expressive speech.

So if anyone asks where Crimson and White came from, tell them they were chosen by a Princess. And how did we find that out? Provenance!

3 Responses to Provenance Times Two: An Early Gift and the Origins of Crimson and White (o Rosso e Bianco)