Posted on June 7, 2010 by
This entry was posted in Jessica Lacher-Feldman. Bookmark the permalink.

The Realist, a pioneering magazine in social criticism and satire, was edited and published by Paul Krassner, a journalist, comedian, author, and driving force behind the Yippies, the “New Left”, and 1960s counterculture.Although the Realist is often considered part of the underground press of 1960s counterculture, it was first published in 1958 in New York City and was nationally distributed by 1959.

The Realist fell out of regular circulation in 1974, and received financial support from none other than John Lennon to stay afloat.The final issue of The Realist ran in Spring 2001.It is widely considered the first magazine to print conspiracy theories and criticizes political, religious and cultural issues. 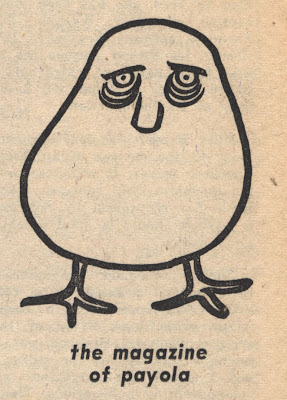 The Hoole Special Collections Library holds fifty issues of The Realist, including the first issue that ran in June-July 1958 as a “social-political-religious criticism and satire” publication and claimed, in its first headline, to be “An Angry YoungMagazine…” Other issues range in date from April 1959 to April 1965.

Our collection of Realist magazines was donated by retired English professor Dr. Mathew Winston. This fascinating publication provides an almost continuous monthly record for over half a decade of what the counterculture was talking about, or often talking against.

Special thanks to Jamie Burke, UA American Studies major for her work with Hoole’s copies of The Realist!

A privately developed online archive of the Realist is accessible here, and an edited volume, Best of The Realist was published by Krasssner in 1984.

This entry was posted in Jessica Lacher-Feldman. Bookmark the permalink.