Posted on August 16, 2010 by
This entry was posted in Jessica Lacher-Feldman, Photograph Collections, UA Buildings. Bookmark the permalink. 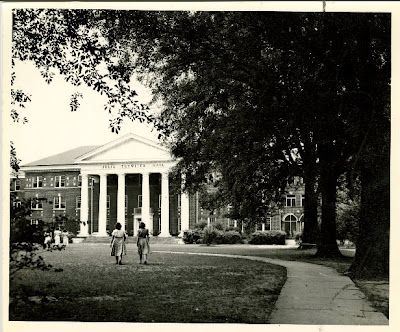 Yesterday marked the 169th anniversary of the birth of the pioneer educator and reformer, Julia Strudwick Tutwiler. Born in Tuscaloosa on August 15, 1841, she brought higher education for women to Alabama, and worked tirelessly for prison and other social reform. She is considered a pioneer and activist far before her time. She even wrote the the song, Alabama, which was adopted as the Alabama state song on the 100th anniversary of her birth in 1931.

Many, many reminders of Miss Julia’s legacy remain, though the one seen here has since been replaced. This photograph, taken in 1950, is of the “old” Tutwiler Hall, which has since been replaced with a second Tutwiler Hall, located just across from Bryant-Denny Stadium on Bryant Drive. We have many more dormitories on campus these days — beautiful new buildings with a river view and new amenities. But it is always interesting to look at where we have come from.

And with that, we not only celebrate the birthday of Julia Tutwiler, but we welcome all the new students and returning students to The University of Alabama!