Posted on February 4, 2011 by
This entry was posted in Alabama Collection, Corolla, Jessica Lacher-Feldman, Sports. Bookmark the permalink. 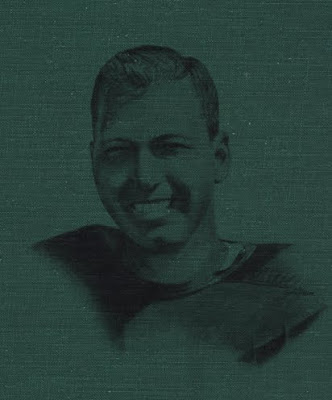 Detail from Quarterbacking by Bart Starr with Mark Cox (Prentice-Hall, 1967) from the Hoole Alabama Collection

The Green Bay Packers will make their fifth Super Bowl appearance this Sunday, and what better way to celebrate is to talk a little bit about someone who who knows a thing or two about winning Super Bowls for the Packers. 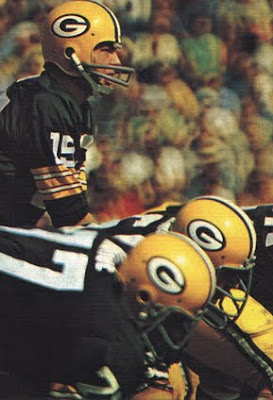 Detail from A Perspective on Victory (NFL Books, 1972) from the
Hoole Library’s Alabama Collection

Bart Starr donned a #15 green and gold jersey to play quarterback for the Packers from 1956 to 1971. Starr’s first season as starting quarterback was 1959, Vince Lombardi’s first year as coach of the Packers. With Starr at quarterback, the Packers won five NFL Championships in seven seasons. Starr led Green Bay to defeat the Kansas City Chiefs and the Oakland Raiders in the first and second Super Bowls, respectively. And Starr was named Most Valuable Player of both of these games (Guess who was MVP of Superbowl III — Fellow University of Alabama player and graduate, Joe Namath!). After Starr concluded his playing career, he remained with the Packers, first as an assistant coach in 1972 then as head coach from 1975 to 1983. Starr appeared in the Pro Bowl four times, was inducted into the Alabama Sports Hall of Fame in 1976 and the Pro Football Hall of Fame in 1977, and has a National Football League award named in his honor, given annually to an NFL player of outstanding character. He is one of five Green Bay Packers alumni to have his number retired. 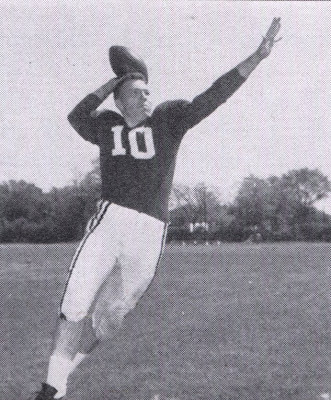 Bart Starr, from the 1956 Corolla in his uniform as Quarterback for the Crimson Tide.

Bryan Bartlett Starr was born in Montgomery, Alabama on January 9, 1934. Prior to his professional career with the Packers, Starr played football at Sidney Lanier High School in Montgomery under head coach Bill Moseley. As a senior quarterback and punter, he earned all-state honors. Under both “Red” Drew and J.B. Whitworth, Starr served as quarterback for the Alabama Crimson Tide.

Starr is featured in the book, Crimson, sharing that The University of Alabama is one that “has always offered uniquely strong foundations for athletic achievement, as well as academic excellence.” Of his time here he says in Crimson, “It was at The University of Alabama where I was privileged to meet so many people who have left their footprints on my life, and where still today, I gain strength and feel a strong sense of pride for what my alma mater has done for me and for so many others who came before me, after me , and for those still to come.” Starr is a successful businessman, inspired public speaker, and tireless charitable work, including the Rawhide Boys Ranch, which was established by Starr in 1965 to work with at risk youth and their families.

On Superbowl Sunday, Alabama fans can lend their support to both the Packers and the Steelers, as we have two former University of Alabama football players competing on opposite sides of the football field in Super Bowl XLV this Sunday. Charlie Peprah now plays for the Green Bay Packers and Anthony Madison plays for the Pittsburgh Steelers. The cheering will be extra loud at Hoole’s own Allyson Holliday’s house — a native of Green Bay, shown here with Bart Starr as a little girl, with her dad and sister, but we should all give a cheer for Bart Starr, Alabama’s very own Super(bowl) Starr! 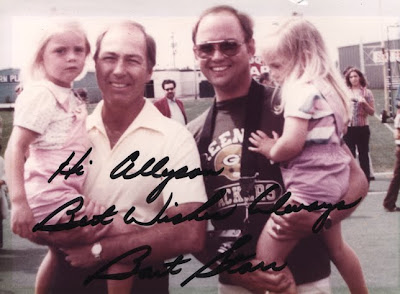 Hoole Library’s own Allyson Holiday, being held by Bart Starr (on the left). Her dad (in pre-cheesehead Packers gear) and sister are on the right.

Thanks to Jamie Burke for her Bart Starr Super-sleuthing and scanning!

One Response to Our Super Starr: Alabama and Green Bay’s Bart Starr