Forty Years After — Emphasis ’68 — Directions: American Society at the Crossroads

Posted on February 28, 2008 by
This entry was posted in Emphasis Program, Jessica Lacher-Feldman, University Archives. Bookmark the permalink. 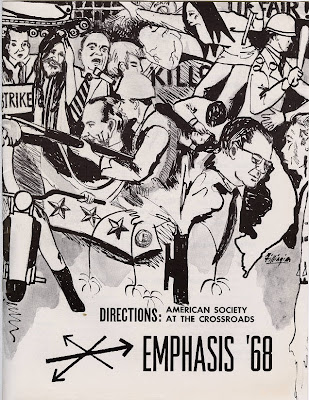 In March of 1968, The University of Alabama hosted a powerful group of speakers brought together to discuss problems and issues in American Society. Emphasis ’68: American Society at the Crossroads stands today as a snapshot in time, that serves to help us understand the political, social, cultural, and economic shifts that were taking place in 1968. Among the speakers were Robert F. Kennedy, who would be assassinated just a few short months later in June of 1968.

organized annual symposia in the late 1960s and early 1970s that served to enlighten and inspire students on the UA campus. It is interesting to note that former Alabama governor, Don Siegelman was president of the SGA when Emphasis ’68 took place and was instrumental in bringing these speakers to The University of Alabama campus. 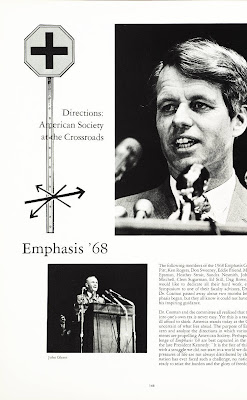 Our digital collections now feature the 1968 Emphasis program, as well as streaming digital audio and transcripts of some of the speeches, which are accessible here. (You will need RealPlayer to access these speeches, which is available here) In addition, we have now made the 1968 Corolla is also available online though our Digital Collections.

The year 1968 — forty years later it evokes — even for those who didn’t live through it — thoughts of unrest, war, violence, uncertainty, change. In 1968, we lost not only Robert F. Kennedy, but the Rev. Dr. Martin Luther King. It was a revolutionary year for politics, music, art, and more. Emphasis ’68 serves as a fascinating time capsule that allows us to better understand campus life at The University of Alabama as well as the world around us during that tumultuous time, exactly forty years ago.

(Images featured here are the cover of Emphasis ’68 — Directions: American Society at the Crossroads; a detail of the Emphasis ’68 program featuring drawings of then SGA President Don Siegelman, and Emphasis ’68 co-chairs Redding Pitt and Ken Rogers, and page 146 of the 1969 Corolla which features information about the Emphasis ’68 program. All this and more is available as part of our digital collections at University Libraries. All original items are part of holdings of the W.S. Hoole Special Collections Library.)