Posted on March 11, 2008 by
This entry was posted in Jessica Lacher-Feldman, Publishers' Bindings Online, Richard Minsky Collection. Bookmark the permalink. 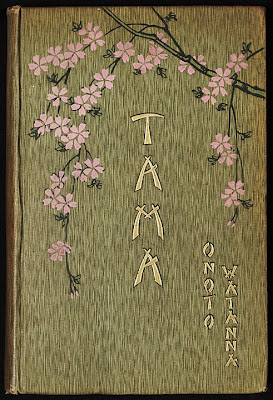 His talk, Turning Japanese: How Winnifred Eaton became Onoto Watanna in Victorian America explores the complicated life of Winnifred Eaton (1879-1954), one of the first known writers of Asian descent to be published in America. She wrote several popular novels set in Japan, yet she tried to hide her own ethnic identity – she was born in Canada to an English father and Chinese mother who had been adopted by missionaries. Eaton published under the Japanese pen name — Onoto Watanna.

Many of Eaton’s novels revolve around romances between American men and Japanese women. In Me, A Book of Remembrance, which was published anonymously, she wrote a thinly veiled autobiography in which she discussed her work as a writer but avoided mentioning her half-Chinese background.

“Eaton’s identity as a writer relied on cultural borrowings and blurrings,” Tang said. “By assuming the identity of a Japanese woman, she bowed to market demands for things Japanese but also challenged distinct racial or ethnic categories that many people at the turn of the century assumed to be fixed and stable.”

The lecture is in conjunction with an exhibit of books by Eaton/Watanna from the Hoole Special Collections Library and the 2008 Sakura Festival at UA and in Tuscaloosa. The books on exhibit are from the Richard Minsky Collection at the W.S. Hoole Special Collections Library, and from a gift from Dr. John Crowley. Some of Eaton/Watanna’s works are featured in the UA Libraries collaborative digital project, Publishers’ Bindings Online, 1815-1930: The Art of Books.

It was in Chicago that Eaton/Watanna published her first novel, Mrs. Nume of Japan (1899), which told the story of a romance involving two couples, one American and one Japanese, who switch partners during a series of romantic and tragic encounters. It was an immediate success. From then on she published almost a novel a year. Moving to New York she wrote her next novel, A Japanese Nightingale in 1901. It was translated into many languages and was even made into a Broadway play and film (1919). She lived in New York until 1917. During that time, she married and divorced Bertrand Babcock with whom she had four children. She had much financial and writing success. In 1910, she wrote the bestseller Tama, which is shown here.

This lecture is part of the Sakura Festival in Tuscaloosa and The University of Alabama. A reception will follow. This event, is of course free and open to the public.