On Subversive Words, Meat and Threes, and the Lasting Importance of Ephemera

Posted on July 17, 2008 by
This entry was posted in Jessica Lacher-Feldman, Rare Books Collection and tagged French Revolution. Bookmark the permalink. 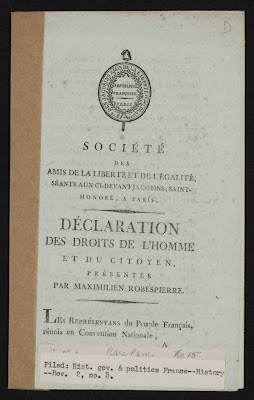 “Paris is flooded with words, people are speaking loudly and openly; leaflets are scattered in the shops, people are stubborn in their opinions.”
Revolution takes ideas — and ideas are spread through words. Arlette Farge, in her book, Subversive Words: Public Opinion in Eighteenth Century France (Penn State University Press, 1995) references phrases like the one above that were penned as commentary in the time leading up to the storming of the Bastille in July of 1789. 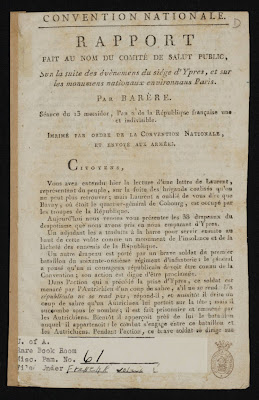 The leaflets or pamphlets were used to spread the word — but never created with the intention of lasting over 200 years. But thankfully, they have. The UA Libraries’ Digital Collections includes forty-seven (to date, with more to come!) pamphlets from the French Revolutionary period. These items have been digitized from the W.S. Hoole Special Collections Library’s Rare Books Collection. There are over 300 of these pamphlets in our collections. The pamphlets include writings by some of the best known players of the French Revolution and Directory periods, including Robespierre, St. Juste, Desmoulins, and Danton.  A few images from the collection are shown here. 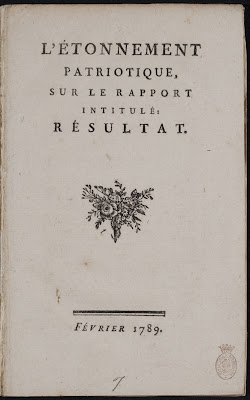 John Lewis in his book Collecting Printed Ephemera defines ephemera as “a term used for anything printed for a specific short term purpose; such things as a bus ticket, a circus poster, a christmas card or a Valentine, a police summons, a tax demand, a pin packet, a soapflake box, a wine label, a beer mat, a cigarette card, an airline ticket, a train timetable or a travel brochure. There is hardly any limit and although books are outside our field, magazines, comics, and newspapers are very much a part of it.” 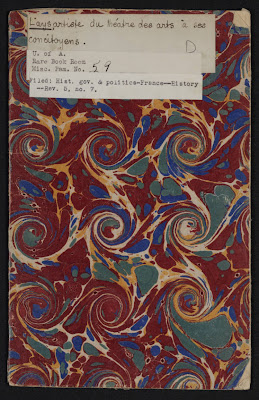 These pamphlets were printed quickly, subversively — and distributed readily throughout Paris and its environs. The format of the pamphlet and leaflet in France serves as a long-standing method of expressing and distributing political and social thought, and was critical in fueling the fires of revolution in Paris in 1789, just as they did forty years ago in the year 1968. 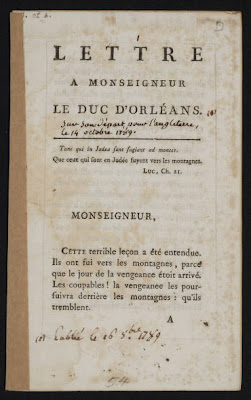 While electronic venues and 2.0 tools — personal blogs, resource sharing tools like Flickr, You Tube, and social networking sites like Twitter have changed the way we share and spread information, the notion of ephemeral means of spreading information is something that, for the creator, was not designed for the long haul. This is one of the ongoing challenges for special collections librarians — identifying and collecting the stuff today that helps to document the past, and will help illuminate the future. 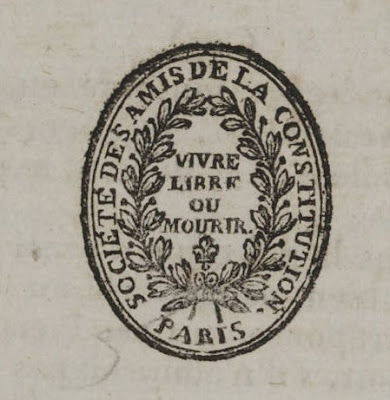 Even if you can’t read them — and especially if you can, it’s very exciting to look at these primary documents to gain a better understanding of what those words meant when expressed and acted upon at a watershed period in history – not just in France, but in several parts of the world.
Speaking of ephemera, an article featured in the Tuscaloosa News today featured a former Hoole graduate student, Robb McIlwain’s Tuscaloosa Menu Project.  His widely used community resource brings a much-needed resource to the public.  And what about those pesky print menus? Well, they have made their way to the Hoole Library — a much valued resource that helps document the local and regional flavor (pun intended!).  As the virtual collection grows,  so we hope does the print collection. And those doing like projects around the state are encouraged to contact us.
Ephemera (old, and new!) is indeed very, very cool!
This entry was posted in Jessica Lacher-Feldman, Rare Books Collection and tagged French Revolution. Bookmark the permalink.