Posted on August 1, 2008 by
This entry was posted in Alabama Collection, Jessica Lacher-Feldman, Map Collections, Mobile. Bookmark the permalink. 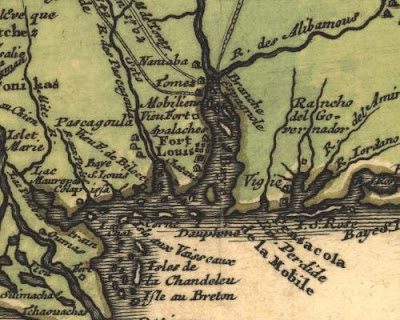 Four hundred and four years ago today, on August 1, 1704, a group of French colonists welcomed twenty-three young women to their new home. These “well-bred” young women, nicknamed the “Pélican Girls”, arrived from France under an order of Louis XIV aboard the ship called the Pélican. They were recruited to move from France tothe wilds of Fort Louis de La Louisiane

(the original name for Mobile) just two years after its founding in 1702. Their purpose was to marry the men and raise families in order to increase Mobile’s population. They were also known, especially later when another group was sent to New Orleans, by the names filles du Roi (girls of the King) or filles à la cassette (“casket girls”) aptly named for their little boxes of personal belongings they brought with them from France.

The Pélican Girls’ arrival was much welcomed, but they brought with them an unwanted guest – yellow fever, which was introduced to the ship in Havana. Most of the Pélican girls recovered from the illness, but a large number of the first colonists, along with many Native Americans in the surrounding area succumbed to the disease.

A list of the young women, clipped from the Google Books version of Colonial Mobile an Historical Study Largely from Original Sources, of the Alabama-Tombigbee Basin and the Old South West from the Discovery of the Spiritu Santo in 1519 until the Demolition of Fort Charlotte in 1821, by Peter J. Hamilton (Houghton Mifflin, 1910) which is available online here.

“<img src=”http://bks8.books.google.com/books?id=RJo_jjfzo44C&pg=PA527&img=1&zoom=3&hl=en&sig=ACfU3U10T7JHWoY1Z_tyqN5YbYLVfQj_Eg&ci=27%2C341%2C912%2C731&edge=1″ alt=”H THE
Of course, there are copies of this book in the Hoole Library’s Alabama Collection, including Hamilton’s 1897 edition.And speaking of yellow fever, there are some great materials available in our collections (and now available online) about W.C. Gorgas (see June 30, 2008’s cool@hoole entry Great News! and Great Letterhead from Loving Son W.C. to his Doting Mother, Amelia.) 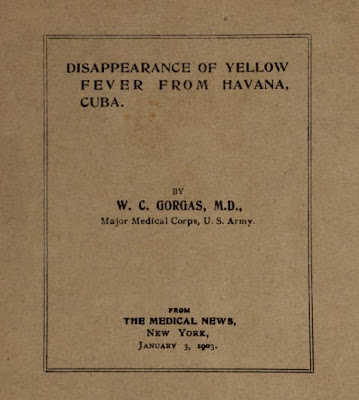 It is the public health work that Alabamian W.C. Gorgas did in Cuba that led to his success in eradicating yellow fever in Panama and making the Panama Canal a reality. The opening of the Panama Canal helped to make Mobile Bay a booming port city in the 20th century, long after the Pélican Girls, but an interesting link in the history of Alabama and the city of Mobile.
This entry was posted in Alabama Collection, Jessica Lacher-Feldman, Map Collections, Mobile. Bookmark the permalink.