Olympic History and a great Alabamian

Posted on August 3, 2008 by
This entry was posted in Alabama Collection, Jessica Lacher-Feldman. Bookmark the permalink. 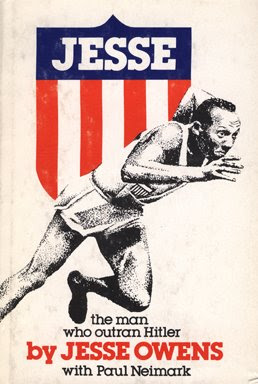 Seventy-two years ago today, on August 3, 1936, track and field athlete and native Alabamian Jesse Owens won his first of four gold medals at the 1936 Olympics in Berlin, Germany.

Owens was born in Oakville, Alabama in 1913 and moved with his family to Cleveland Ohio when he was nine. He attended Ohio State University and won a record 8 NCAA individual championships, four in 1935 and four in 1936. And in the span of forty-five minutes on 45 minutes on May 25, 1935 at the Big 10 meet at the University of Michigan, he set three world records and tied a fourth.

Despite his international fame and success as an athlete, he faced huge challenges and humiliations because of racial bias and Jim Crow laws in his native country. For example, after being given a ticker-tape parade in New York, he was required to take the freight elevator to his own reception at the Waldorf-Astoria Hotel. His story, much like the story of fellow Alabamian and stellar athlete Joe Louis is filled with tragedy stemming from racial bias. Both men also share in their contributions to anti-Nazi efforts leading up to the United States’ participation in World War II.

In 1996, The Jesse Owens Memorial Park opened in his hometown of Oakville, Alabama. An poem by Charles Ghigna is inscribed on the plaque dedicating the park, and it reads:

May his light shine forever as a symbol
for all who run for the freedom of sport,
for the spirit of humanity,
for the memory of Jesse Owens.

Jesse Owens was inducted to the Alabama Sports Hall of Fame in 1970. He was awarded the Presidential Medal of Freedom in 1976, and posthumously given the Congressional Gold Medal in 1990. He is also recognized in Germany, with a street and a school named for him in Berlin. His birthplace in Oakville, Alabama dedicated a park in his honor in 1996, and also brought the Olympic Torch through the community, commemorating his Olympic triumph sixty years earlier. The Ohio State University named their track and field stadium, The Jesse Owens Memorial Stadium.

Much more can be learned about Jesse Owens in Hoole’s Alabama Collection — where books about Owens and other great Alabamians abound. And later this week, if you choose to watch the 2008 Olympics, it is interesting to think about some of the people who helped pave the way — as Americans and world citizens — for those who compete today.

This entry was posted in Alabama Collection, Jessica Lacher-Feldman. Bookmark the permalink.