Celebrate Poetry in all its forms…

Posted on April 1, 2009 by
This entry was posted in Jessica Lacher-Feldman, Manuscript Collections. Bookmark the permalink. 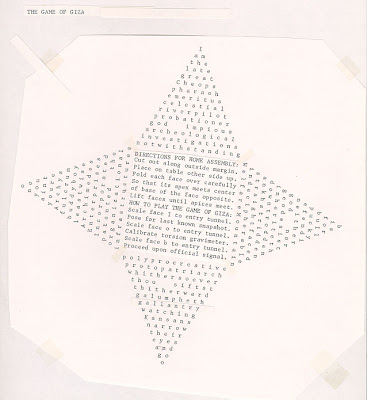 The Game of Giza by George Edwin Starbuck 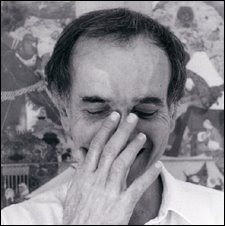 George Starbuck was born in Columbus, Ohio in 1931, to a migrant academic family. In

his mid-teens, he studied mathematics for two years at the Cal Tech. He also attended the UC Berkeley, the University of Chicago, and Harvard, but took no degrees.

He was an agricultural worker, a military policeman, and a fiction editor at Houghton Mifflin in addition to directing two of America’s finest graduate programs in Creative Writing — the University of Iowa and Boston University.

Starbuck taught English and poetry for twenty-five years at the State University of New York at Buffalo, then at the University of Iowa and Boston University. He gave poetry readings in nearly every state as well as abroad. Due to illness, he took early retirement in 1988. He was the distinguished chair holder in poetry in 1990 at The University of Alabama.

While at the State University of New York, Buffalo, in 1963, he was fired for refusing to sign the required loyalty oath. He initiated a challenge of New York’s Fineberg loyalty oath law and was successful when the Supreme Court of the United States overturned that law. Also in the 1960s he was an anti-Vietnam War organizer and activist.

His first book, Bone Thoughts (1960), won the Yale Series of Younger Poets prize. He subsequently received a Guggenheim Fellowship, the Prix de Rome of the American College of Arts and Letters, and other awards. He was a fellow at the American Academy in Rome and later at the Rockefeller Foundation in Bellagio, Italy.

White Papers, his second book, set a standard for charged, edgy American political poetry. His next, Elegy in a Country Church Yard, is the world’s widest concrete poem. Desperate Measures tackled, with fine Byronic insouciance, everything. Talkin B.A. Blues is a book-length rhyming picaresque in rhinestone-sourdough style. In 1982, Atlantic Monthly Press and Secker and Warburg (London) published his new-and-selected poems, The Argot Merchant Disaster. That book won The Nation’s Lenore Marshall prize, among others, for best book of poetry. He published two small books with bits Press: Space Savers Sonnets and Richard the Third in a Forth of a Second.

He was honored with the Aiken-Taylor Lifetime Achievement Award at the University of the South in Sewanee, Tennessee, in 1993. He passed away in Tuscaloosa, Alabama in 1996 after a twenty-one-year struggle with Parkinson’s disease.

Two posthumous anthologies, Visible Ink and The Works, both edited by Elizabeth Meese and Kathryn Starbuck, were published by The University of Alabama Press.

Celebrate the written word with the man who X.J. Kennedy once said, “makes the American language roll over and whistle, “Dixie.”

This entry was posted in Jessica Lacher-Feldman, Manuscript Collections. Bookmark the permalink.