In great confusion I drop you a line…: A Letter from the Creek Indian War

Posted on August 30, 2012 by
This entry was posted in Jessica Lacher-Feldman, Manuscript Collections, Native Americans. Bookmark the permalink. 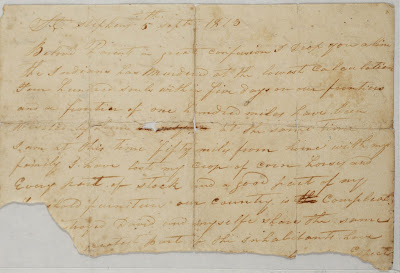 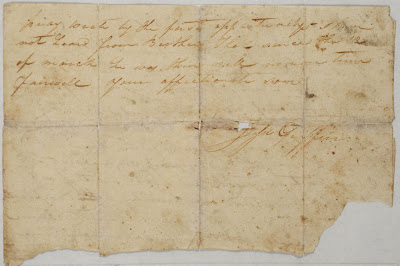 On August 30, 1813, Creek Indians, under the leadership of William Weatherford, also known as Red Eagle, attacked Fort Mims in what is now Baldwin County, killing nearly 250 settlers who had gathered there for protection. The attack caused fear and hysteria among frontier settlers, who quickly raised militia companies to fight in what became known as the Creek War, from 1813-1814.

The Hoole Library holds an incredible piece of evidence from that violent time, in the form of a letter from a man named Jesse Griffin to his parents.  Griffin states in his powerful letter that he has traveled 50 miles in flight from the Creeks, who killed more than 400 people in 5 days.

Although Griffin and his family survived, they lost their crops, livestock, and most of their household goods. The Creek Indian War lasted from 1813-1814,  where Creeks attacked white settlers moving into Creek lands.  The war ended on March 27, 1814, when General Andrew Jackson defeated Red Eagle and the Creek warriors at the Battle of Horseshoe Bend in Alabama.

Finally, Cool@Hoole is glad to be back after a bit of a hiatus!  Please visit often, add us to your blogroll, and like us on Facebook!  Got a comment or a thought? Contact me at JLF@ua.edu!