Who Will Win the Race?

The House With A Clock In It’s Walls

September 21, 2018 is the release date for the movie version of author John Bellairs 1973 children’s book House With a Clock In It’s Walls.  The movie is a major production directed by horror film expert Eli Roth.  It will be starring Cate  Blanchett, Owen Vaccaro, and Jack Black. 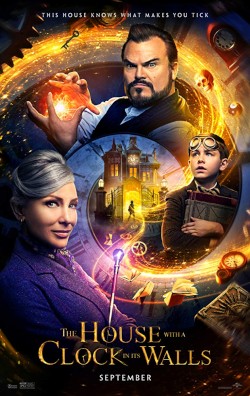 In House With a Clock In It’s Walls, Lewis (played by Owen Vaccaro in the film) goes to live with his mysterious uncle, Jonathan (Jack Black) who lives in a typically spooky mansion in Marshall, Michigan.  Yes, it is a real town, and there is a real mansion, called the Cronin House, in Marshall, Michigan.  It is here that Lewis meets his uncle’s equally weird neighbor, Mrs. Zimmerman (Cate Blanchett) and discovers their connections to the occult and the clock embedded in the walls of the house.  When Lewis, inadvertently, wakes the dead, the action takes off even as the ticking clock begins to speed up.  Who will win the race to stop the clock?

To add to the overall spookiness of the situation the illustrations in the book were done by Gothic illustrator extraordinaire, Edward Gorey.   Gorey wasn’t really that fond of doing the illustrations for books, thinking of them as drudge work and something he had to do to make a living.  However, there is no doubt that his illustrations added to the Gothic tension in the story that attracted young readers. 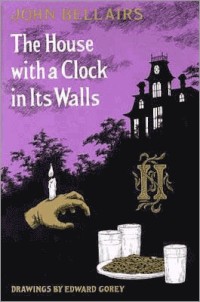 McLure Library has several Bellairs books in the collection.  If you go to the movie, or maybe you just want to reread a loved book, come on over and check one of them out.  House With a Clock In It’s Walls  (Or any of Bellairs other books.)