Join your fellow knitters for one day of knitting in public.  Saturday, June 9, 2018 is World Wide Knit in Public Day.

The needle arts have long been a popular and one of the most popular of needle arts is knitting.   If you don’t knit you can read about knitting.  There are a surprising number of children’s books that feature the needle arts and knitting in particular.  McLure has many of these titles ready for you to check them out.  Check out the following titles at McLure Education Library. 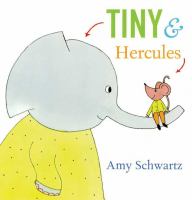 Five short stories about the lives of two unusual friends: Tiny, an elephant with a fear of ice skating and a newfound love of knitting, and Hercules, a mouse with a heart of gold and a desire to learn to paint. 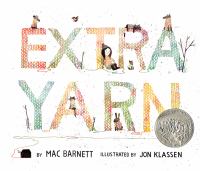 With a supply of yarn that never runs out, Annabelle knits for everyone and everything in town until an evil archduke decides he wants the yarn for himself.

A classical take on knitting – and its consequences.   The 1974 Caldecot winning children’s book Duffy and the Devil makes for a rollicking read. 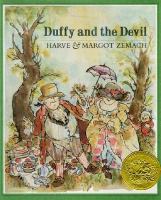 The spinning and knitting the devil agrees to do for her win Duffy the Squire’s name and a carefree life until it comes time for her to guess the devil‘s name.  Then there is the Devil to pay.

For a historical perspective on knitting take a look at this book. 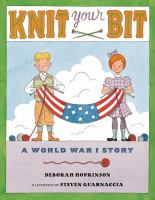 When his father leaves to fight in World War I, Mikey joins the Central Park Knitting Bee to help knit clothing for soldiers overseas.

For those interested in knitting something for themselves, McLure has a book help get you started. 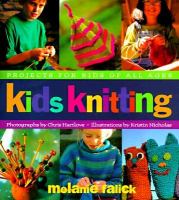 Knitting in public is not for everyone or every time.  When you want to knit alone, this is the book for you. 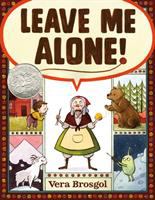 Grandmother wants so badly to be left alone to finish the knitting for her grandchildren that she leaves her tiny home and her big family to journey to the moon and beyond to find peace and quiet to finish her knitting.

But if you are tired of knitting alone?  Then.  Be Bold.  Be Brave.   Go public.

Get those needles and that yarn and take your knitting out of the closet, your room, or your house.  Knit while you eat that Big Mac.  Knit while you sip your Starbucks.  Knit at your local bookstore while you listen to a recorded book.  Or best of all, read aloud to kids while they knit.

Emerging technologies provide many opportunities for new and different teaching methods. The use of applications, or apps, on devices such as smart phones and tablets are one way to introduce material while also teaching digital literacy skills and incorporating interactivity that makes it more interesting for the users.

There is an abundance of educational apps. These apps vary in age range, subject, and cost. Since it would be impossible to list all of them, we want to share a few examples illustrative of the tools available to teachers and parents. (one of the many examples of apps based on books) “This award-winning, graphically rich timeline, developed by The American Revolution Center, a non-profit educational institution working to build The Museum of the American Revolution, offers information and access to rare treasures from the Center’s collection that will be displayed in the new museum.” “Smithsonian Mobile is your digital mobile guide to the Smithsonian, built collaboratively with our visitors. Find out what’s on where, discover highlights, search our collections, access tours, podcasts and other apps.” “TinkerBox is a fun, free-to-play physics puzzle game. While it is full of interesting science facts and teaches basic engineering concepts, TinkerBox is more than just educational! Take the tools in your hands to explore your creativity and imagination with Invent mode. Build outrageous machines, share them with your friends, or download popular inventions from online.” “Design scenes, dress up characters and let your imagination soar as you invent your own stories with Felt Board. Especially designed for imaginative play, storytelling and learning, Felt Board is perfect for children, families, teachers and therapists.”

Hopefully this list has made you aware of some of the resources available in the world of apps and inspired you to search for others. There are many websites with app recommendations and reviews where you can find more information about apps to suit your particular needs, including Common Sense Media, APPitic, and CLCD’s monthly newsletter.

Let us know in the comments if you use any of these apps or have any other app recommendations!

Last month we talked about the appeal of series books and shared some picture book series books available at the library. We’d like to continue the discussion with more suggestions.

The introduction of slightly longer books helps readers transition away from picture books. Short, easy chapter books are a great tool for improving reading skills, serving as a stepping stone between picture books and novels. Here are a few series available at McLure we recommend:

Rotten Ralph by Jack Gantos
“Ralph, a very, very nasty cat, finally sees the error of his ways — or does he?” Magic Tree House by Mary Pope Osborne
“Eight-year-old Jack and his younger sister Annie find a magic treehouse, which whisks them back to an ancient time zone where they see live dinosaurs.”

Dinosaurs before dark
The knight at dawn
Mummies in the morning
Pirates past noon
Night of the Ninjas
Afternoon on the Amazon
Sunset of the sabertooth
Midnight on the moon
Dragon of the red dawn
Dark day in the deep sea
Eve of the Emperor penguin
A perfect time for pandas
Stallion by starlight
Hurry up, Houdini!
High time for heroes

The Time Warp Trio by Jon Scieszka
“Joe’s been caught up in a book before, but this is ridiculous! Joe’s Book, a gift from his magician uncle, doesn’t just tell stories, it zaps Joe and his friends Sam and Fred right into the middle of them.”

Knights of the kitchen table
The not-so-jolly-Roger
The good, the bad, and the goofy
Your mother was a Neanderthal
2095
Tut, tut
Summer reading is killing me!
It’s all Greek to me
See you later, gladiator
Sam Samurai
Hey kid, want to buy a bridge?
Viking it & liking it
Me oh Maya!
Da wild, da crazy, da Vinci
Oh say, I can’t see
Marco? Polo!

Junie B. Jones by Barbara Park
“Meet the World’s Funniest Kindergartner–Junie B. Jones! In the 1st Junie B. Jones book, it’s Junie B.’s first day and she doesn’t know anything. She’s so scared of the school bus and the meanies on it that when it’s time to go home, she doesn’t.”

Horrid Henry by Francesca Simon
“Horrid Henry and his neighbor Moody Margaret decide to make the most sloppy, slimy, sludgy, sticky, smelly, gooey, gluey, gummy, greasy, gloppy glop possible. Is it the best glop in the world or the worst thing that’s ever happened to them? Plus three other stories so funny we can’t even mention them here.”

Captain Underpants by Dav Pilkey
“When George and Harold hypnotize their principal into thinking that he is the superhero Captain Underpants, he leads them to the lair of the nefarious Dr. Diaper, where they must defeat his evil robot henchmen.”

Ramona Quimby by Beverly Cleary
“Beezus’ biggest problem was her 4-year-old sister Ramona. Even though Beezus knew sisters were supposed to love each other, with a sister like Ramona, it seemed impossible.”

We’ve read several articles recently about current book trends and reading behaviors. Here is a list of a few favorites you might find interesting.

According to a recent report, reading rates are in decline. So what’s the cause? Many people are quick to blame technology, but perhaps the problem stems more from larger cultural attitudes toward reading. “At the end of the day, how our children read and what our children read says a lot more about adult attitudes than it does about our kids’.” Ever noticed the acacia tree that seems to grace the cover of every book with an African author or setting? Regardless of style or subject, this tree has become ubiquitous with “African” books. The author examines why this is, blaming preferences by publishers to follow tradition and simplify the “other”. In this article, the writer shares a personal account about encouraging his son to read. While this includes incentivizing reading by making it a requirement before video games, he mostly focuses on how to make books appealing so that kids will choose to read. For instance, the comic book format of a graphic novel looks more like entertainment than reading, and eBooks offer both a technology aspect and the gratification of instant access.

“Why You Should Avoid Best-Selling Books”

While everyone loves the glamour of the newest best seller, it might not be the best investment of your time. The knowledge it offers is ephemeral, serving as conversation fodder until the next best thing is published. On the other hand, books that withstand the test of time promise relevancy in the long term. They also offer a way to set yourself apart: “If you read what everyone else reads, soon you’ll start thinking like everyone else.”

We have several picture book series at McLure in the curriculum materials library downstairs. These books are great because they enable kids to read new books while still feeling comfortable with familiar characters. Also, if they like a book, you have a ready list of recommendations for further reading. A few popular series at the library include:

Olivia by Ian Falconer
“Whether at home getting ready for the day, enjoying the beach, or at bedtime, Olivia is a feisty pig who has too much energy for her own good.” Pigeon by Mo Willems
“The bus driver turns over the duty of watching the bus to you, with one instruction, don’t let the pigeon drive the bus.” David by David Shannon
“A young boy is depicted doing a variety of naughty things for which he is repeatedly admonished, but finally he gets a hug.” No, David!
David gets in trouble
David goes to school
It’s Christmas, David!

Skippyjon Jones by Judy Schachner
”Skippyjon Jones is a Siamese cat with an overactive imagination who would rather be El Skippito, his Zorro-like alter ego.” What are your favorite picture book series?

Reading is one of the first things we learn in school and for good reason. Education in almost any subject relies on the ability to read. Strong readers are much more likely to succeeding in future academic endeavors, whether it be a standardized test or a college diploma. This might seem obvious, but for further proof, look at articles like “Reading Can Make You Smarter!” by Anne Cunningham and Keith Stanovich.

So how do we create good readers?

In his book, The Read-Aloud Handbook, Jim Trelease advocates (as you might have guessed from the title) for more time spent on read alouds. Reading out loud to children is one of the best ways to improve their reading and listening skills, as well as foster a love of books. Throughout the book, which I would highly recommend reading, Trelease discusses the importance of reading and reading aloud. Additionally, he shares tips and techniques for reading to kids of all ages. The last section includes his “treasury” of books well suited to reading aloud, including a brief description and age range.

Here are a few suggestions of picture books good for reading aloud:

Where the Wild Things Are by Maurice Sendak (PZ7.S47 Wh)

Cloudy with a Chance of Meatballs by Judi Barrett; Illus. by Ron Barrett (PZ7.B2752 C)

These are just a few of my personal favorites, all of which are available here in the Education School Library downstairs. And don’t forget to browse through the oversized books, which are great for sharing with classes!