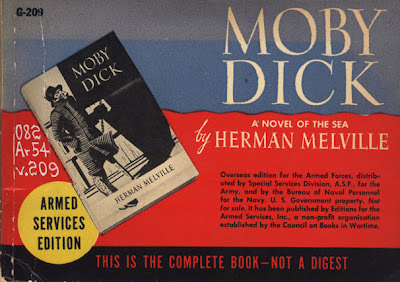 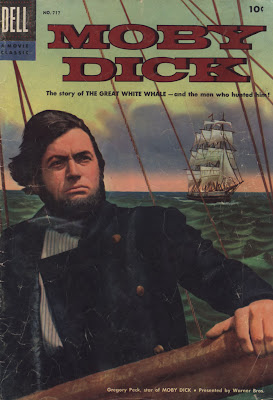 Though the novel had very limited success during Melville’s lifetime and beyond (he died in 1891), it stands today as part of the Western canon, and one of the most important American novels.

The “Melville Revival” began around the time of World War I, when the novel found new relevance in the wake of the Modernist movement. The book continues to speak to readers, with complex metaphors representing good and evil, power, and class. Literary critic Nick Selby said, “Moby-Dick was now read as a text that reflected the power struggles of a world concerned to uphold democracy, and of a country seeking an identity for itself within that world.”

These two examples of Moby-Dick shown here represent interesting examples of the rethinking and repackaging of great American literature. The first, an example of an Armed Services Edition, offers a compact version of the novel to American servicemen. These small paperbacks were distributed widely during World War II and exposed soldiers to a variety of great works of both the 19th and 20th centuries, along with a variety of other materials. The Hoole Library holds nearly a complete collection of Armed Services editions, one of the most complete collections held in libraries.

The second image is the cover of the 1956 Dell comic edition of Moby-Dick, based on the 1956 film starring Gregory Peck (best known by fans great Alabama literature as the beloved Atticus Finch in the film version of Harper Lee’s To Kill a Mockingbird) as the tyrannical Captain Ahab. Though this is a far cry from Melville’s dense prose, it is a welcome introduction to the great American authors, perhaps inspiring children to take the leap from comics to great American Literature! But there is room for every form and interpretation of this epic tale.