The Lecture that Never Was: Eleanor Roosevelt and the Death of President Foster

Posted on March 8, 2013 by
This entry was posted in Crimson White, Jessica Lacher-Feldman, UA History. Bookmark the permalink.

On the back of an unassuming phys ed grade chart, the discovery of a lecture that never was has come to our attention and to our collections, thanks to Ken Gaddy and the staff at the Bryant Museum.

On November 18, 1941, Mrs. Franklin D. Roosevelt, first lady of the United States, was scheduled to deliver a lecture entitled, “The America We Want” in The University of Alabama auditorium.

The lecture was never to be.  According to Mrs. Roosevelt’s “My Day” column for November 19, 1941, she was asked to cancel her engagement at The University of Alabama because of President Richard Clarke Foster’s illness. “After my lecture last night, in Greenville, we returned home, for, unfortunately, the President of the University of Alabama, where I was to lecture tonight, was taken seriously ill, and they asked me if I would cancel the lecture. To find myself at home with two unexpected days of leisure is something really to rejoice over, though I am sorry the cause had to be somebody’s illness.” 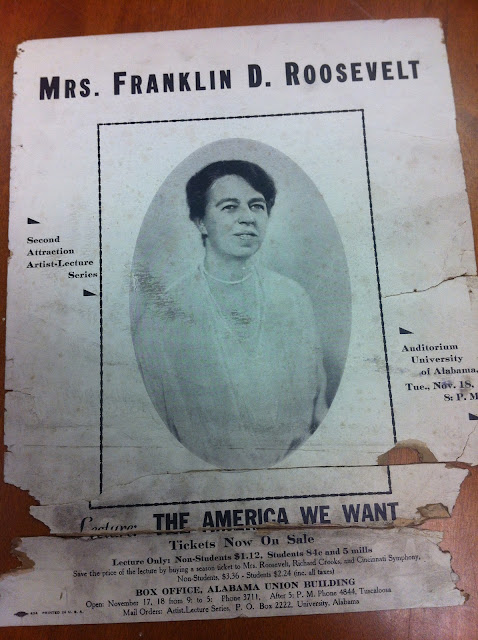 Sadly, the sudden illness that struck President Foster took his life.  He passed away on November 19, 1941.  He was much beloved on campus, and in addition to an immediate fund drive to purchase the Richard Clarke Foster Memorial Iron Lung for Druid City Hospital (his sudden illness brought to light the immediate need for such a machine), the very auditorium where Mrs. Roosevelt was to speak was named in his honor soon after.

Foster Auditorium, in its newly renovated glory, served as the site for countless dances, pep rallies, performances, basketball games, class registrations, as well as the very place where integration finally came to pass at The University of Alabama.  While many may remember hearing of Mrs. Roosevelt’s lecture that never was, and know of Dr. Foster’s sudden and untimely death, might not realize how these two events were connected. 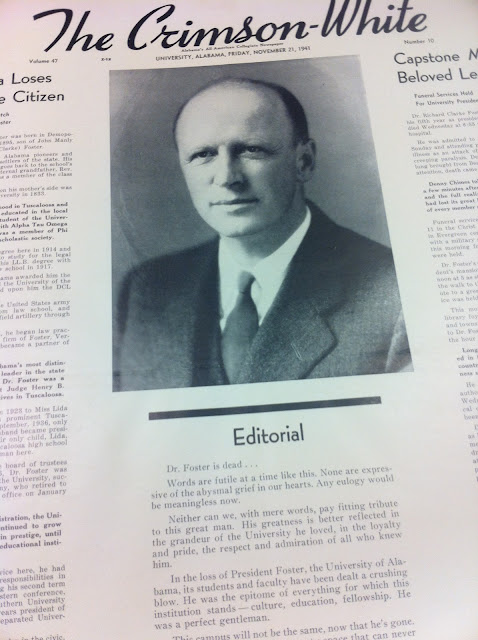